This year’s RA Summer Exhibition tackles the all too relevant theme of ‘Climate’ with wit, imagination, humour, awe and urgency, writes our contributor Emily Walters.

Art alone cannot halt environmental breakdown, but it can instill in us a sense of resilience, help us to plot pathways to repair and awaken us to the necessity of forging a kinder world. After two years in winter, the RA’s Summer Exhibition has returned to its rightful season to tackle the urgent, all-encompassing theme of ‘Climate’. Coordinated by Royal Academician Alison Wilding, the show is rooted in opening out the polarities intrinsic to the issues at hand: crisis or opportunity, sublime or quotidian, paralysis or action. And as always, this 253rd edition of the world’s largest open submission art show is mammoth in scale, displaying nearly 1500 works including prints, photography, architectural designs, sculpture, film and painting across 13 expansive rooms. It’s an approach that perpetually divides the critics, with such super-abundance offering all too easy a target; particularly in a time where refined minimalism is the expected aspiration. But for those excited at the prospect of wall-to-wall artworks in resplendent polyphony, a captivating, impressively far-reaching show awaits. After all, feeling overwhelmed by the gravity of the situation might just prove crucial.

That said, in light of this year’s chosen theme, it is worth envisaging how a radically pared-back display might better resound with our collective need for slowness and resistance to over-consumption. But to do so would equate to rewriting the exhibition’s DNA; perhaps threatening its joyous openness to welcoming a vast multiplicity of artists from heavyweights to new discoveries alike. In any case, by offering a pressure gauge of the strains on the world we’re inhabiting, the show is testament to how artists can help us metabolise and make sense of such an unruly threat: engendering invention, inciting reflection and urging action.

In the courtyard, verdant trees disrupt the stony symmetry of the RA’s façade. Obscured by the greenery is an angular, black labyrinth, the smooth onyx exterior of which gives way to rugged inner walls resembling textured tree trunks and entangled mossy roots. Water trickles perpetually down these mesmerising structures, drawing attention to the passing of time whilst evoking a sense of rejuvenation. Mirrors are interspersed throughout this immersive installation, confronting the viewer with their own image, producing an immediate abuttal of humankind and Mother Nature. But are we witnesses or disrupters? Is this constructed landscape a nourishing sanctuary from Piccadilly’s urban bustle, or rather a galvanising hall of mirrors? The processes behind Iglesias’ sculpture attest to the potential of resourcefulness and creativity, with the bas-reliefs having been produced from by-products of the bronze manufacturing process and the custom-developed draining floor and closed-circuit pump continuously recycling water to prevent any wastage. By foregrounding the inextricable relationship between ourselves and the surrounding world, this artwork calls upon us to look: look at what we’re capable of inventing, look at what we desperately need to protect.

As in Iglesias’ labyrinth, mirrors are a recurring feature of the works on display in this year’s Summer Exhibition. In Gavin Turk’s Enigma, a photograph of a peculiar stack of domestic paraphernalia is printed onto dichroic glass. When viewing this sculpture, our image is mirrored within the shifting colours of this composite material such that our likeness intermeshes with this ominous pile of discarded waste. This is not quite a rose-tinted lens, but rather an echoed veil of the sunshine-hued gallery walls, thereby producing a compelling paradox of enticement and revulsion.

Comparably, a trio of sculptures by Ron Arad RA incorporates a similar play with visibility. On an Aretha Franklin vinyl sleeve, an exhibition book from 2012 and a large white surface, the word ‘love’ is laser cut from sheets of mirror-polished stainless steel; this cut-out is flipped upside down to read ‘song’. In the context of climate, this visual palindrome is imbued with poignancy as the calligraphic inscription of the letters ‘l’ and ‘s’ call to mind the curved form of a swan, and in turn, that heart-aching metaphor of this silent creature’s first and final song.

When considered together, Turk and Arad’s mirrored artworks do not solely raise questions of agency, vanity and responsibility, but equally serve to reflect the exhibition walls back at the beholder. Including such sculptures in the show affords a crucial element of self-awareness, probing the limits of genre and form, challenging us to consider the extent of what art alone can achieve. This idea is encapsulated with brilliant immediacy by Fiona Banner/The Vanity Press on a large monitor that displays a film of an ISBN on a hymn board. With no suggestion as to what the number refers, this is a disconcerting and elusive piece. The chosen context and form of identification throws the exhibition space into direct contrast with a library or church and encourage comparison between books and works of art. Banner accordingly foregrounds themes of trust and faith; urging us to reflect on what there is to be gained from simply beholding imagery and prompting an interrogation of the robustness of the information on which we rely. 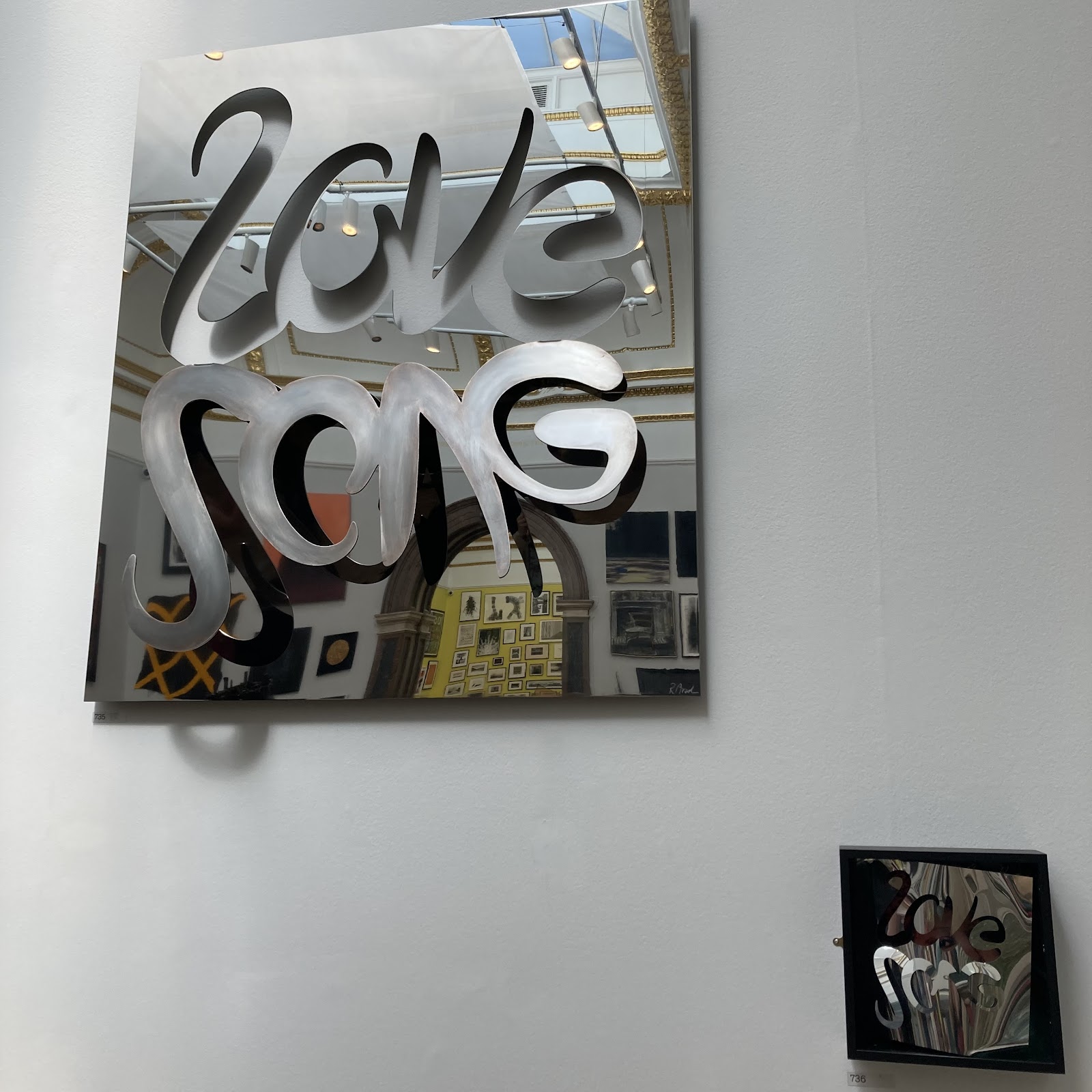 For serious mischief: Because You’re Worth It? II (Slaves of Fashion Series) by The Singh Twins, Very Limited Penguins by Laura Ford, Night Riding by Patrick Blower, We All Go a Bit… by Marie Pep, Thanks, man! by Scott Brooker.

It’s notable that numerous artists have chosen to broach the climate crisis with a biting sense of humour. The Singh Twins acerbically reclaim that well-known slogan ‘…because you’re worth it…’ with an interrogatory twist underneath an infernal scene condemning fast-fashion. Then there’s Laura Ford’s wittily named Very Limited Penguins comprising a trio of fabric sculptures of the titular birds nightmarishly huddled on a wooden plinth. Icons of art history are reimagined for the eco-conscious by Patrick Blower, who has Vermeer’s Girl with a Pearl Earring cycling through the night, and by Marie Pep, who juxtaposes Munch’s screaming figure with Hokusai-style crashing waves. And finally, Scott Brooker’s Thanks, man! is a richly textured, arresting oil painting, depicting a polar bear giving us the finger. If it’s tempting to critique these tongue-in-cheek artworks for making light of such a grave situation, or perhaps to consider them reductive, then it’s worth remembering the power they hold in stopping viewers in their tracks. These pieces are potent conversation-starters, and that’s just what we need from environmental art. 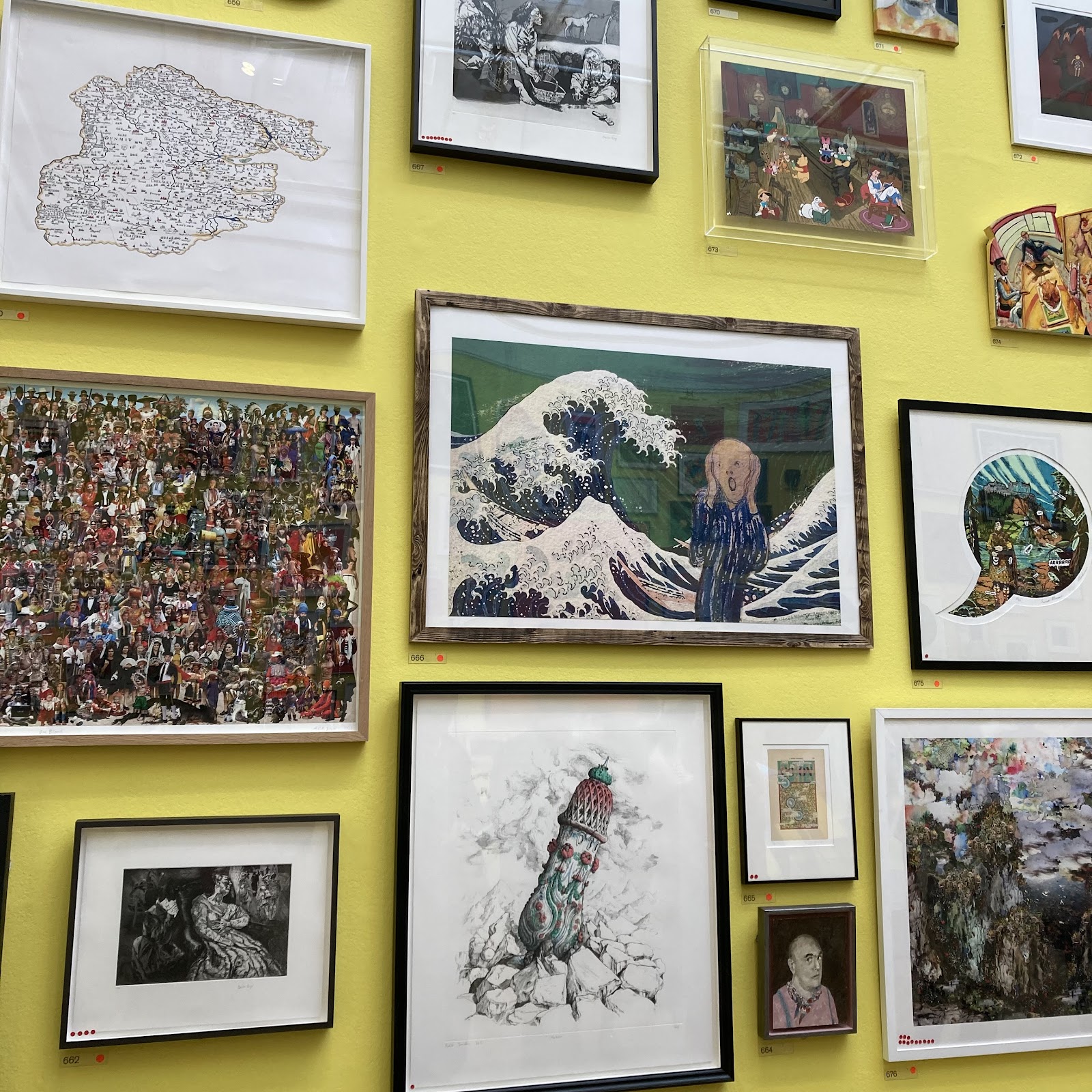 For an urgent reminder of precarity: Europe Contemporary – Cold War by Yanko Tihov, Under Lime by Simon Starling, Cull by Uta Kögelsberger.

In spite of this summertime show being pitched as joyful and celebratory, many artists refused to shy away from depicting harrowing realities in the works they submitted. For Yanko Tihov, this takes the form of a lenticular print of a European map in which geographical borders shift as it is viewed from different angles. These varying shapes and colours encourage the spectator to move around the artwork, bringing to mind fluidity, absence and presence. In a powerful visualisation of the jurisdictions and borders that bind us, regions are demarcated by the edges of old and new passport covers that illustrate the unions formed and destroyed over the years. In the context of climate, Tihov’s work maps the burdensome footprints we leave, asking us to contemplate the impact of nationhood, division and the policing of identity on our planet.

Similarly, Simon Starling’s Under Lime and Uta Kögelsberger’s Cull are also concerned with the devastation that humanity is capable of wreaking. Starling’s sculpture is startling and disruptive: below eye-level hangs a chainsaw, suspended at the bottom of a hoist. In raising our gaze upwards, we discover a leafless lime tree branch that appears to have grown through the RA’s elaborately decorated plaster ceiling. As the chainsaw is poised, ready to sever the single, spindly branch, we are caught in a liminal moment – an opportunity to take action or to allow the damage to happen. While Starling’s sculpture is surrounded by a plethora of artworks, Kögelsberger’s film has a jet black room of its own. Removed from the bustling cornucopias of the other gallery spaces, this audio visual piece is afforded a solemn intensity even before it begins. This five-screen installation depicts the felling of charred trees in the Sequoia National Forest. As a result of devastating wildfire, they have been deemed hazardous to human life. On each screen, we witness them crashing down one by one, fade to black, and then a further five trees appear for the culling to resume. The scale is overwhelming and deeply shocking – rightly so, given many of the trees are over 2,000 years old. The looping of the trees’ destruction feels relentless, particularly as they tower so sublimely above only to helplessly disappear. Every so often, tree surgeons move across the bottom of the screens – almost unfathomably miniscule in comparison – reminding us of the power relations enmeshed in the destruction we are witnessing. Cull is one of many explorations of this subject matter from Kögelsberger, with previous films having been screened on huge billboards in both the UK and the US. The experience of this work up-close is distinctly brutal and impactful, as it confronts us with highly detailed, textured images of a once majestic landscape now scorched and obliterated. Relayed immediately before our eyes, it implores us not to turn our backs. 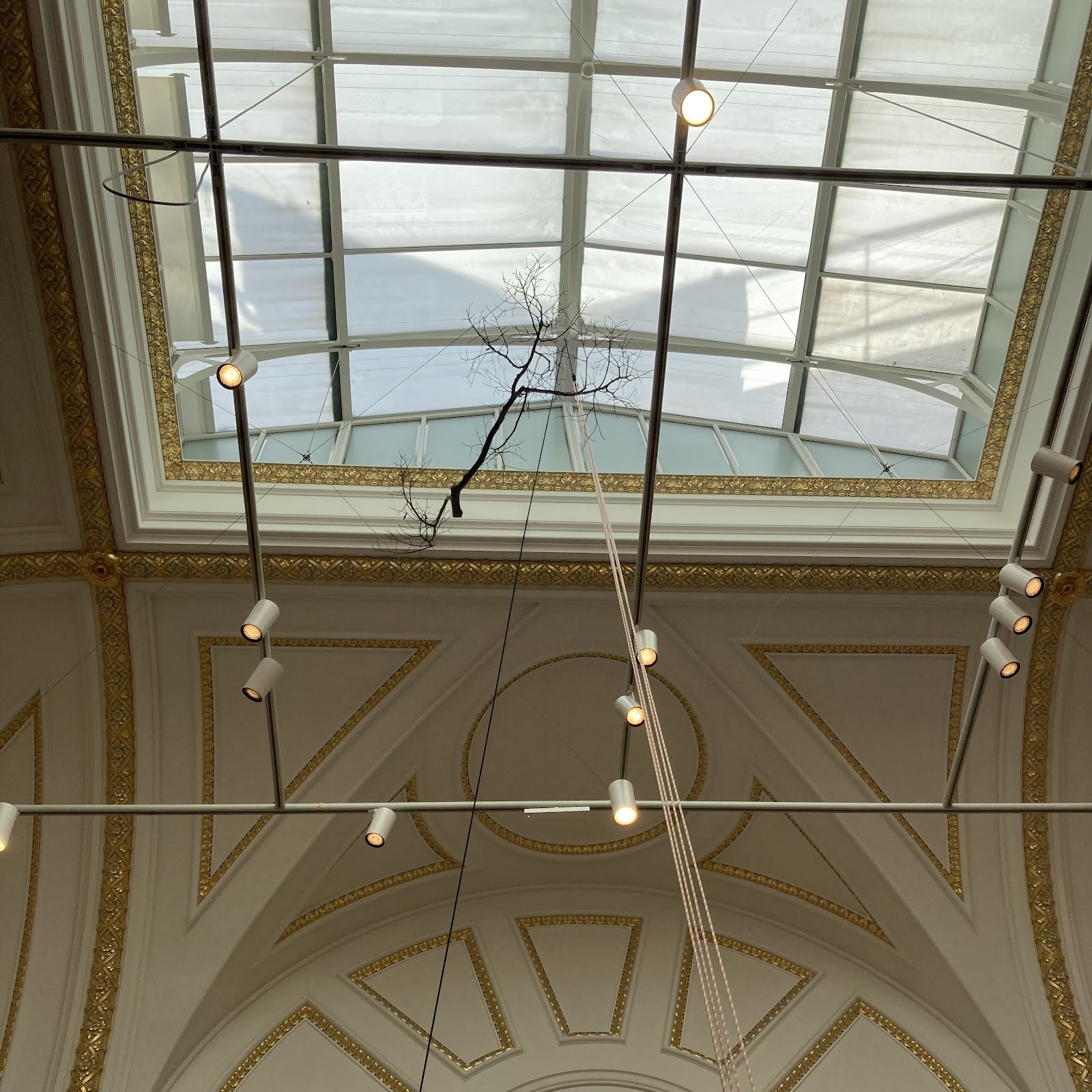 If environmental art is too desolate and without hope, the only response we can expect is helpless inertia. This is where the captivating array of works on offer at the Summer Exhibition serves an especially wonderful function. The show ranges all the way from the whimsical (celebratory prints on vibrant yellow walls, as chosen by Grayson Perry) to much darker, grittier spaces like the room curated by Conrad Shawcross. Without tiptoeing around the severity of the crisis – quite the opposite – the exhibition remains full of awe for the world that surrounds us. There’s tenacity, recovery, ingenuity and nourishment: the galvanising kind of hope that only creativity affords.

The Royal Academy’s Summer Exhibition 2022 will be showing until 21 August. Click here for more information or to book tickets.